On 9 August, 2021, shortly after the start of the Asian trading session, a 10-minute selloff sent most precious metals down to multi-month lows.

Spot Gold (XAUUSD) fell more than 4% and reached its lowest since March at USD 1686.6 per ounce. Later, it recovered some of the losses, but it was still around a four-month low. Gold afterward recovered to trade USD 1743.20 per ounce the following day.

At the time of preparing the report, Silver was trading just below the USD 24 mark, after dropping more than 7% and hitting its lowest since 30 November, 2020. Platinum, Nickel, and Copper suffered similar price action.

Expectations that the Federal Reserve will start trimming its easy Monetary Policy have started gaining ground since mid-June and have helped the U.S. Dollar maintain its recovery.

Generally, Dollar-denominated assets have an inverse relationship with the U.S. Dollar, which was trading above its 50-day moving average at the time.

We can see that in effect when comparing price action. 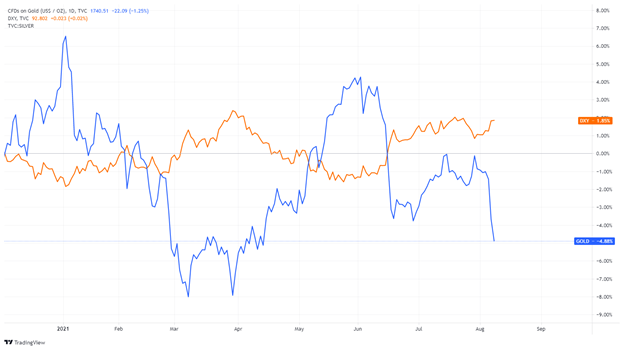 We think the early morning's selloff was the overhang from the Friday 6 August forecast-beating jobs report, which could be the report that prompts the Federal Reserve to take hawkish action and set the new trend in markets.

**Overhang is a buildup in selling pressure, mainly from holders grasping back in fear of losing the value of their holdings.

A big part of the drop could be attributed to panic selling induced by early Asian-session sellers who failed to catch Friday’s employment report selloff.

According to data provided by Bloomberg, more than 3,000 contracts were transferred in a one-minute window. This equates to more than USD 500 million in value, and it happened in a usually quiet trading period.

The outlook for metals is bearish for the medium term (3-6 months), with most fundamentals showing a rise in interest rate expectations.

The appeal of precious metals as a hedge against inflation is starting to fade as markets will now start to price in the imminent interest rate increase and the ensuing slowdown in inflation.