The Evergrande Crisis and Fallout Potential

What is the Evergrande Group?

Founded in 1996, Evergrande became known for building residential real estate and became one of the biggest property developers in China and the world. It is also listed among the Fortune Global 500. The company’s massive growth was fueled by China’s infrastructure-driven growth spree between the 2000s and 2010s.

According to the group’s website, the company has approximately 200,000 employees and creates over 3.8 million jobs per year. Besides real estate, the company operates in electric cars, food and beverage, grocery and dairy, sports, and theme parks.

The Evergrande Real Estate Group is China’s second-biggest real estate developer by sales, boasting over 1,300 projects across China, and is about to default on USD 305 billion of debt, containing supplier credit, bank debt, and short-term loans. So, how did this happen?

Below is a complete analysis of the crisis and the timeline leading to the current situation. 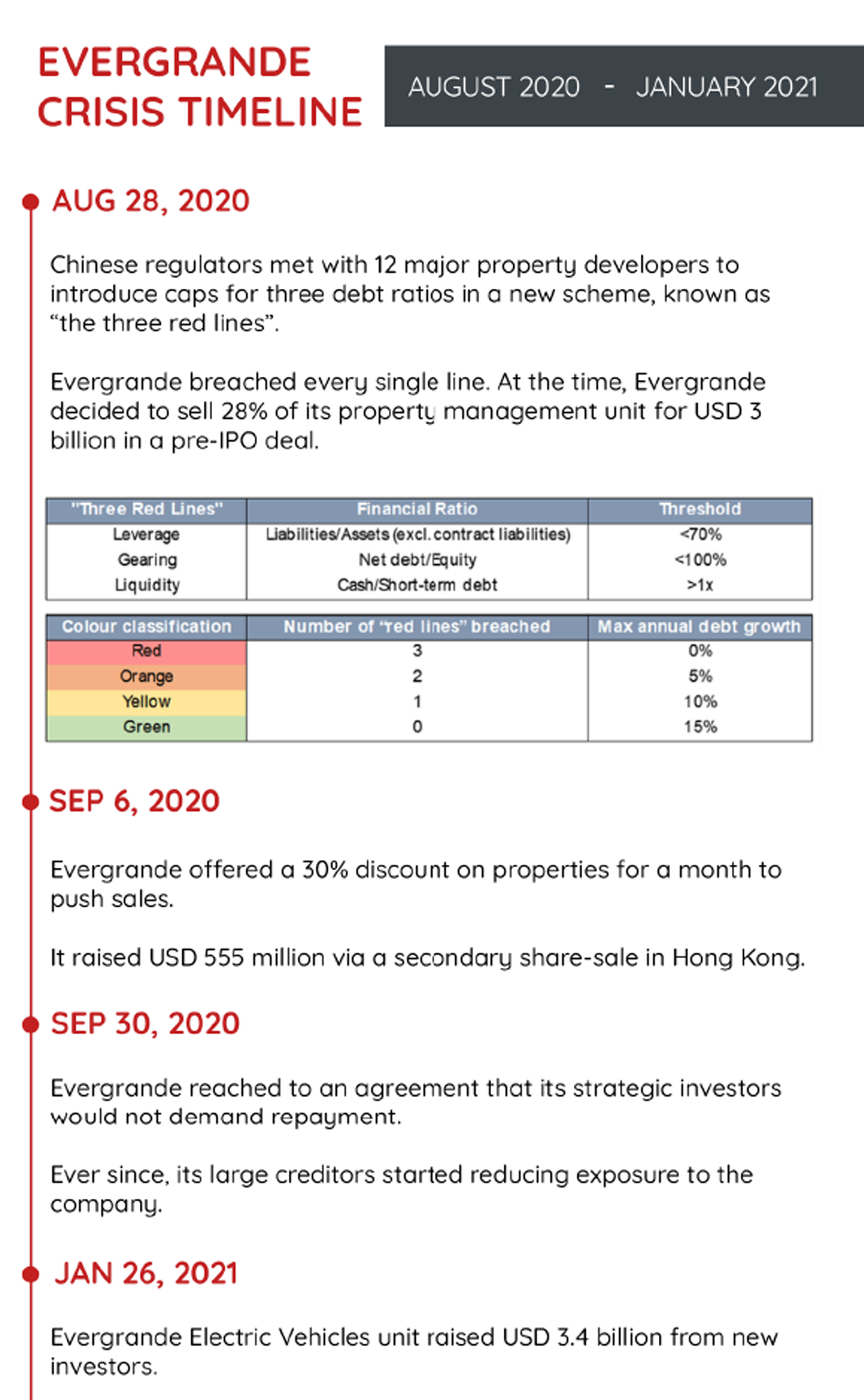 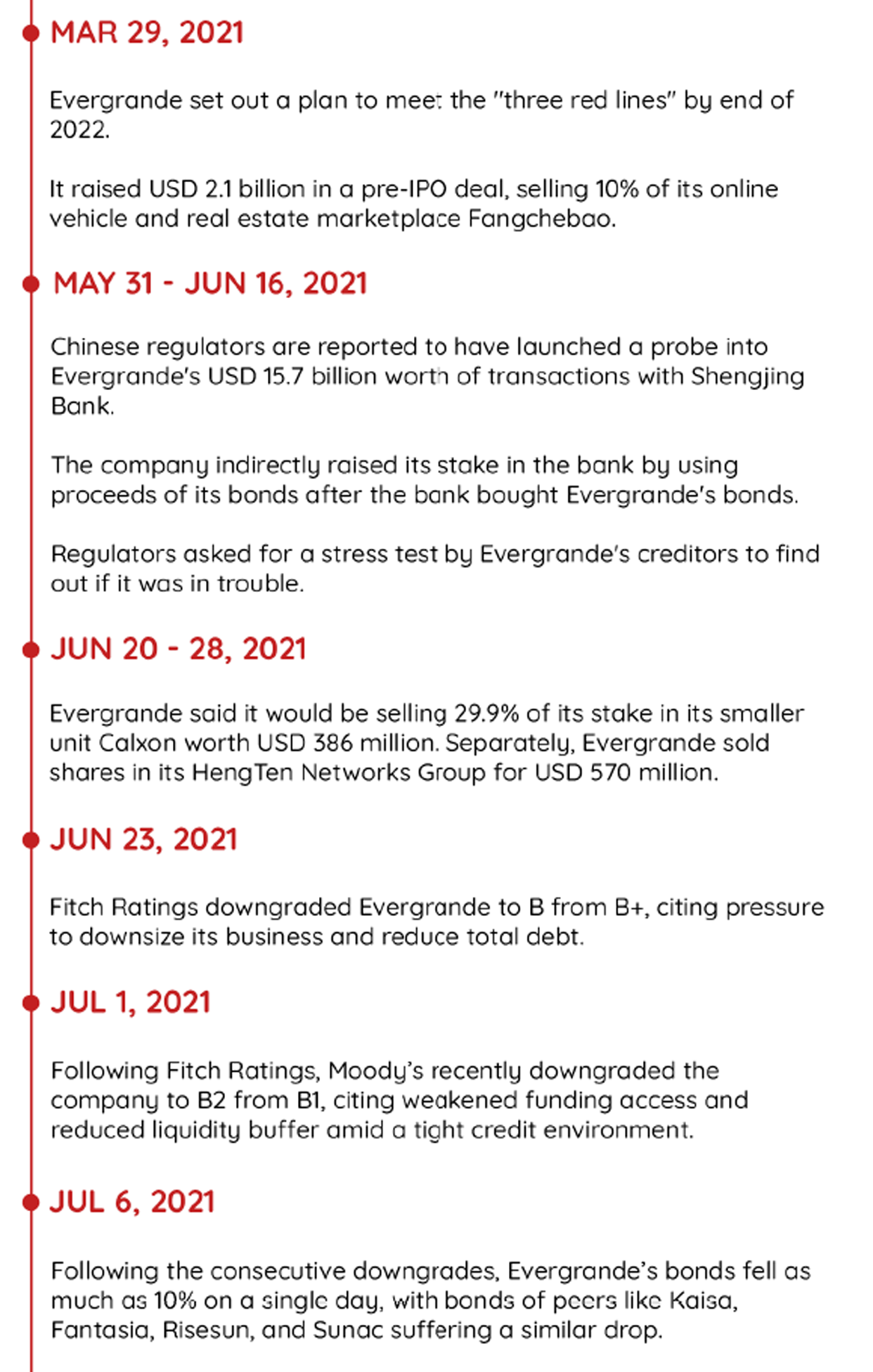 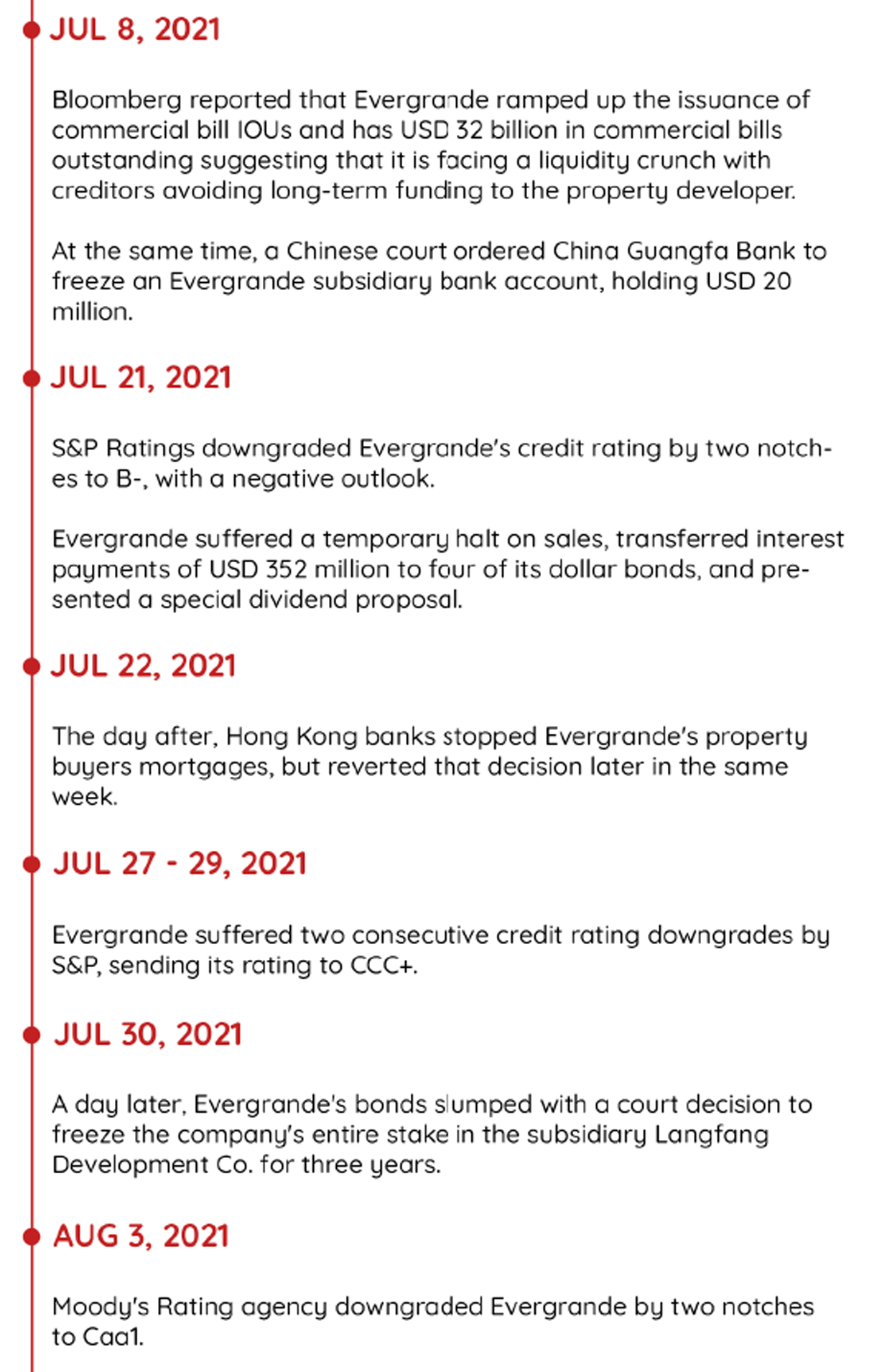 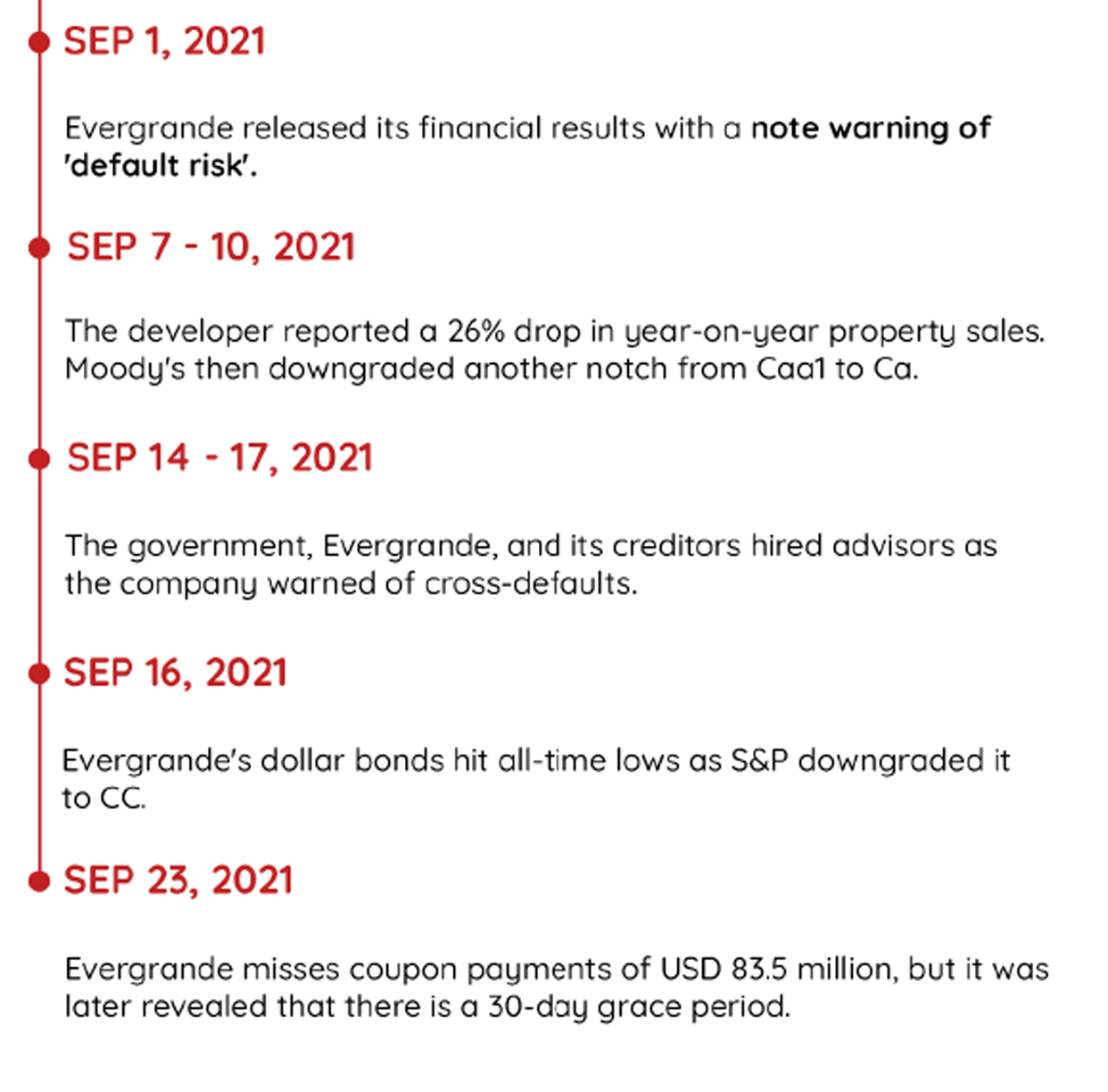 The following chart highlights how property developer problems began before 2021.

We can see how Evergrande started the accelerated accumulation of debt in the middle of the previous decade.

With the company constantly shedding its assets to meet periodic obligations, the few years leading to 2021 only exacerbated its ability to repay its liabilities.

Real estate price discounts and continuous asset sales did not do service to the company's profit and profit margins, with investor confidence plummeting along. 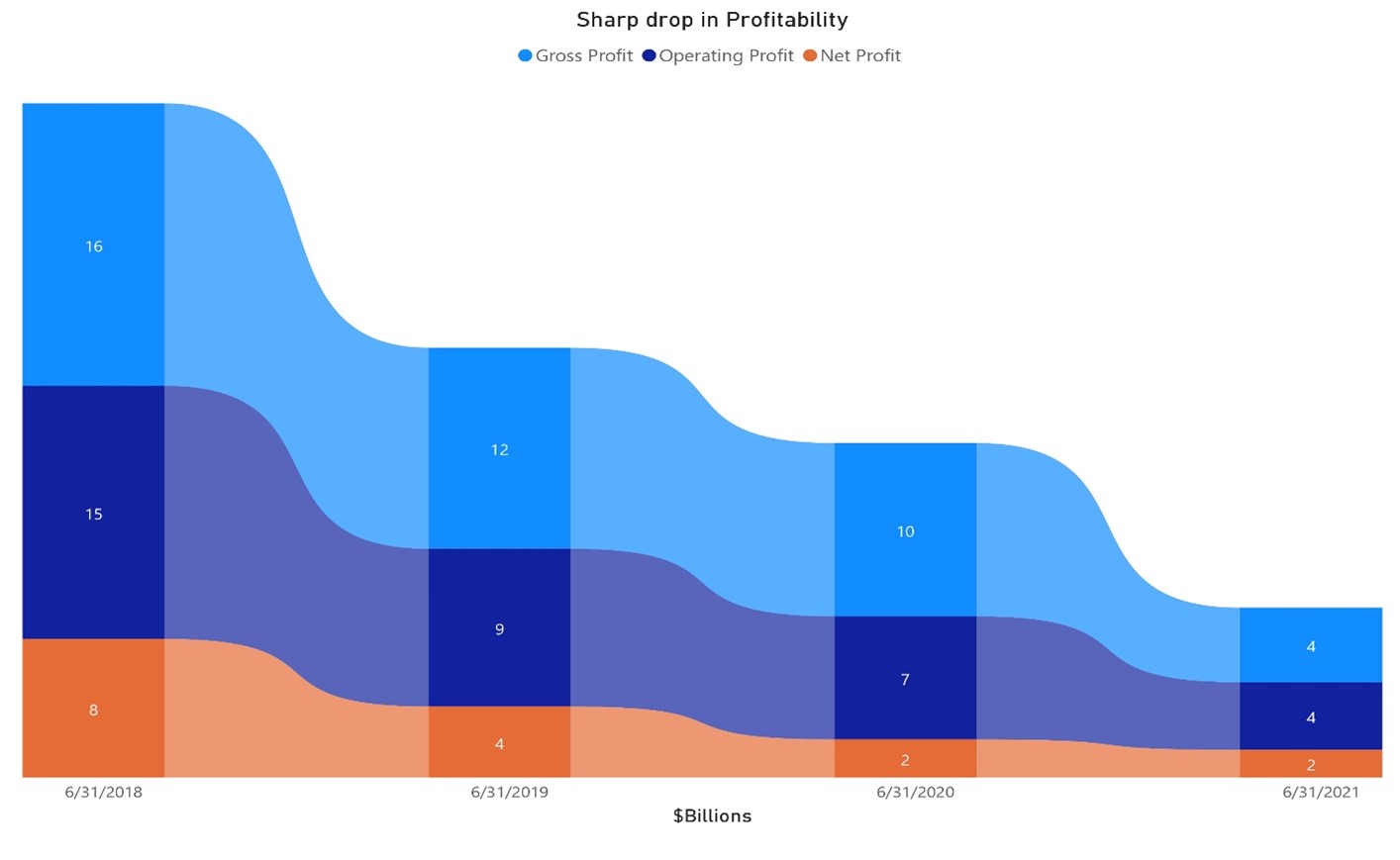 The real estate sector in China is known to have lengthy cash conversion cycles and extended maturation, as most of that liquidity gets withheld in inventories and multi-month-long receivables.

The system allows property developers to undertake very large volumes of short-term debt and refinance it through non-bank financial intermediaries. This is called "Shadow Banking", which helps them take up that money with little regulatory interference.

With that in mind, Evergrande took advantage of that and adopted the debt-dependent growth model, and started diversifying into the other fields mentioned above. As we can see from the following chart, the company start raking up piles of short-term and long-term debt to finance these other projects.

This changed when Chinese regulators introduced the "Three Red Lines" scheme. It became clear that the group will not be able to consistently repay its debts considering its reliance on refinancing its debt.

The company's inability to meet the government's "Three Red Lines" scheme meant it cannot amass any more debt as easy as it used to. 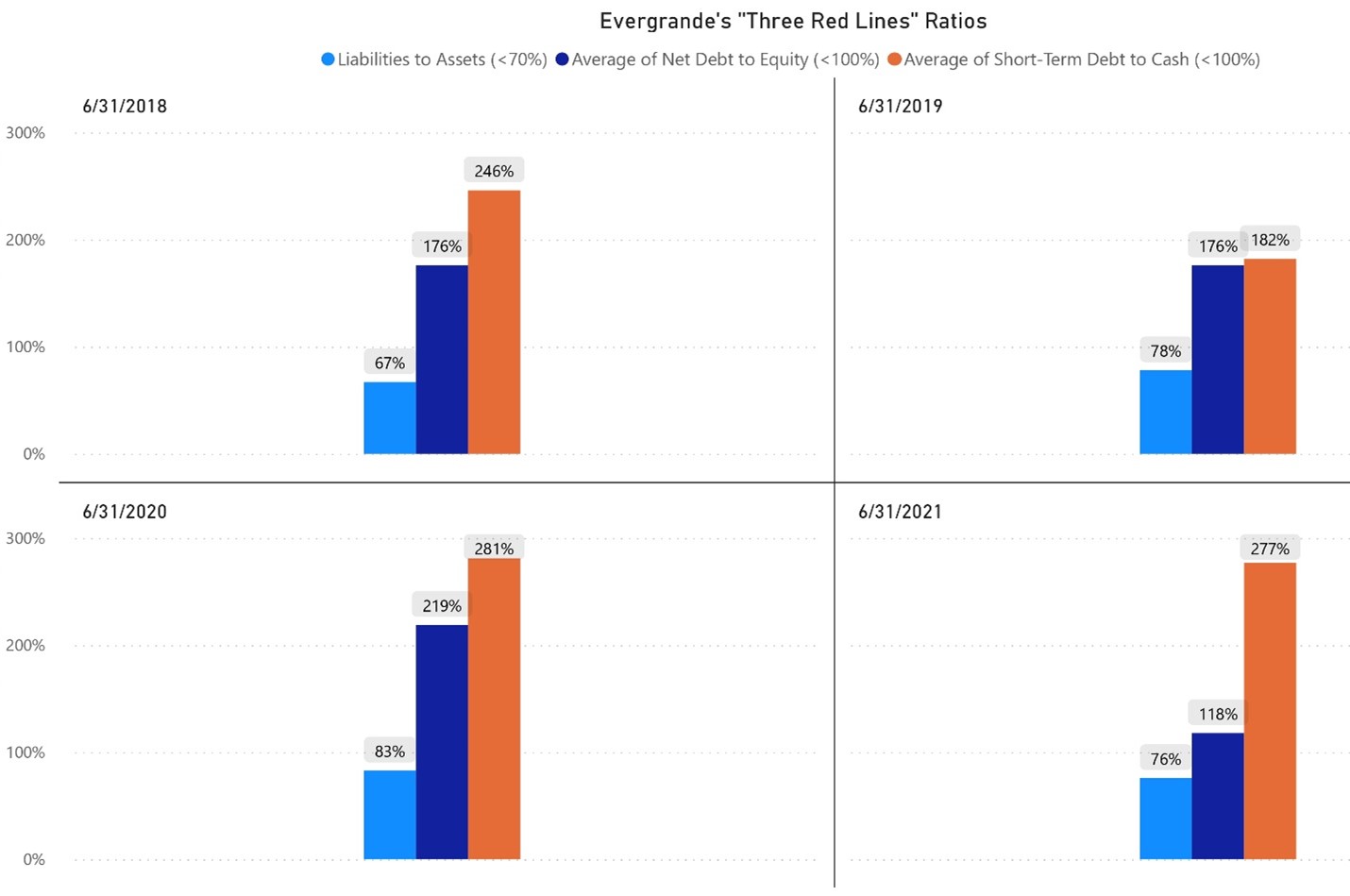 At this point, the company has weakening fundamentals, continuous inability to repay its bond payments, and a bar against any intervention from the Chinese government and central bank, which leads to the conclusion that a bankruptcy is imminent. 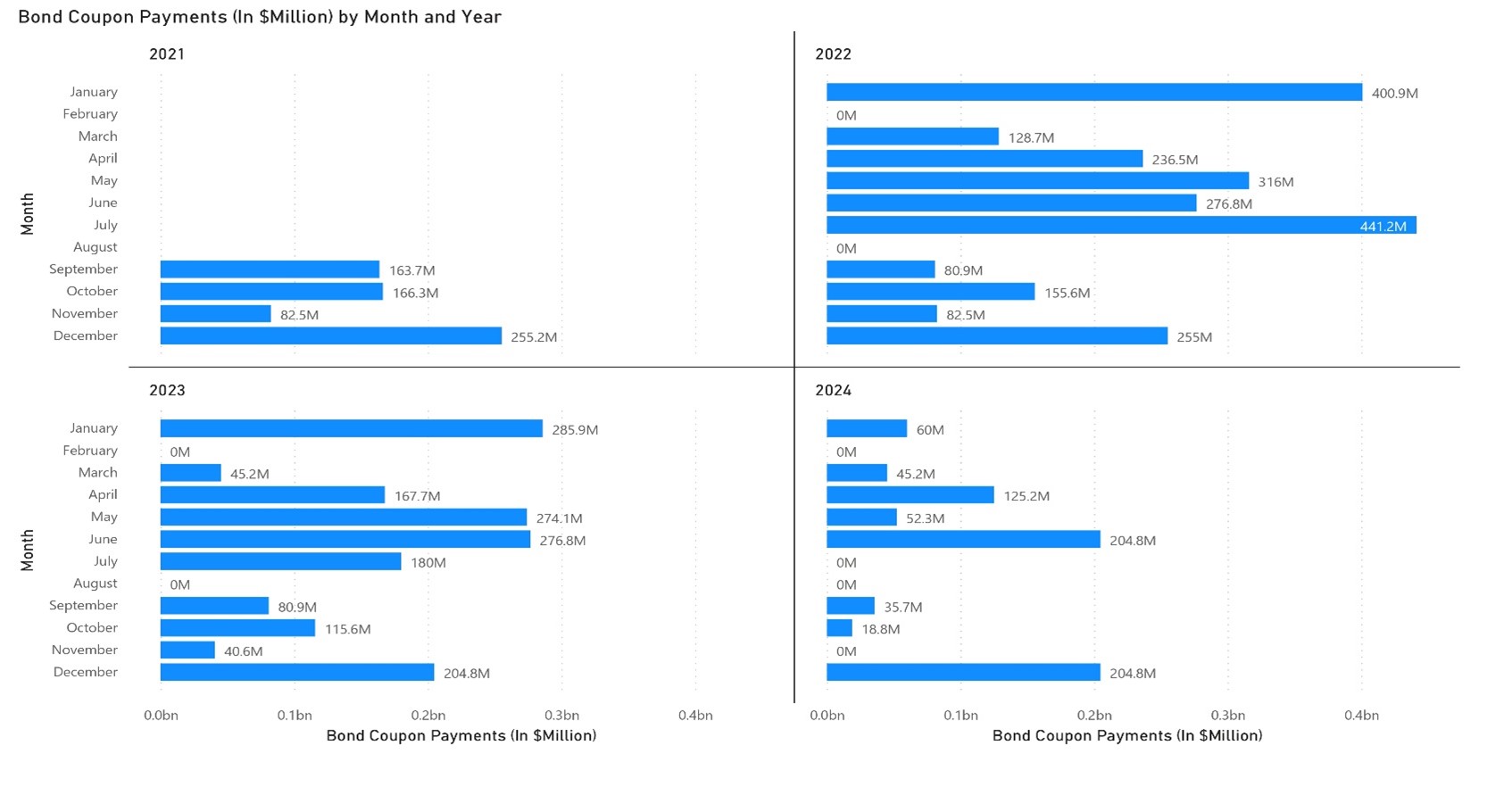 Evergrande has to cover around USD 600 million in coupon payments by the end of 2021, bearing in mind that we are still in September and the company has already started to miss out on payments.

Bloomberg pits the probability of a default at 8.65% within the next 12 months, up from 1.5% during the same time last year. Bloomberg's default risk rating continues to worsen and is closing to being destressed, which is their lowest risk category. 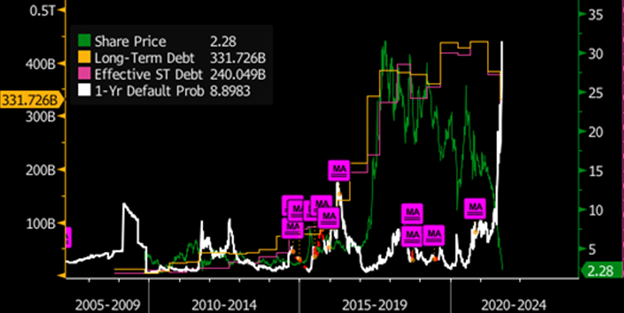 The spillover effect on global markets is a highly expected outcome when Evergrande defaults.

As Evergrande misses its obligations, its lenders and stakeholders will have problems covering their own obligations. Another key factor to note, Evergrande has $1.5 million deposits for buildings that are yet to be delivered and unlikely to be paid back.

A fire sale for the company's assets would add more downward pressure to the prices of the entire real estate market, which accounts for 29% of China's GDP with property services.

Extra selling pressure will impact everything they hold, from stocks to cryptocurrency holdings. Banks may be reluctant to lend these investors, which could exacerbate the cash crunch issue.

In China, the government said it will not bail the real estate giant, giving that it will create a precedent, but then injected $18.6 billion into the banking system in an effort to avoid a liquidity crunch.

Some intervention is expected, but most likely only for stakeholders in China. Another possible solution is Evergrande coming to new terms with its creditors, agreeing to pay less of its obligations, but paying a portion nonetheless.

The People's Bank of China proposed an emergency liquidity system earlier this week, hinting that they will probably try to negate and avoid catastrophic damage to its financial system.

This means it is still difficult to predict what might happen, given that some key players are yet to move.

Also to note, this comes when most global central banks and governments are stretched very thin in terms of monetary and fiscal support due to the pandemic.

While Evergrande is one of the largest real estate developers in China, the sector itself is fragmented. A hit to Evergrande and some parts of the financial system could be managed without a direct bailout.

However, should the contagion cause the rest of the large developers to fail or default, government intervention is all but assured.